Two, Two, Two Posts in One

Mr Uriasposten’s reputation, for me anyway, as the Danish Instapundit is verified again with these two posts.

In this, the first, he is referencing (yet another instance of) the discussion about having to pay for permission to use a TV, a radio, and/or a computer in Denmark. As this law has roots going back nearly 100 years, it has reached the stage of a tradition around which most just accommodate themselves and look askance at those who want to change it. To wit:

The right-wing parties exhibit a bit of the Stockholm syndrome when it comes to the licensed media. On the one hand, they would like to be critical, but on the other hand, they don’t really want to think outside the box. The explanation is simple. The average Danish voter has, in the name of the welfare-state, learned to love its oppressors and it gives no immediate electoral benefit to confront inherited concepts.

Very astute. It also explains why the most recent budget agreement passed in the US makes no effort to cut spending. No one votes for less money to themselves. 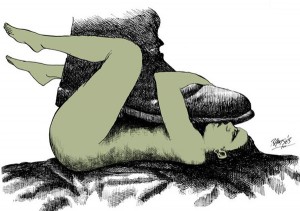 Perhaps a bit over-the-top with regards to the question of paying a TV license, but generally applicable for so many other themes.

This image accompanied the text; I don’t know from where it came, but I really like it.

Next, the second post, Mr Uriasposten comments on how the shopping carts from Danish shopping malls are disappearing in large numbers. Most shopping malls in Denmark are located such they are easily accessible to those who want/have to walk. Even with that Aldi-esque annoyance of renting a cart for some small amount, does not prevent this: når folk finder nogle pæne vogne, der kører godt, så tager de dem med op i deres lejligher (when people find some nice carts that drive well, they take them up to their apartments).

A multicultural society is one where it is necessary to legislate everything. There are no common norms and everything that is not nailed down will disappear into the parallel societies.

My personal opinion about this is that while I agree with the point, these shopping carts don’t carry this argument as well as they might. Way back in the 70s and 80s, the problem of disappearing carts was manifest and for the same reasons. It was not then as serious as it is now, but this problem also has roots in the apathy of those who live in wealthy societies.

By the way, the title comes from an old Certs commercial (do a Youtube search on “two, two, two mints in one”).

This entry was posted in Uncategorized. Bookmark the permalink.